Ascendance of a Bookworm Wiki
Register
Don't have an account?
Sign In
Advertisement
in: Lore, Gods & Scripture, Light Novel 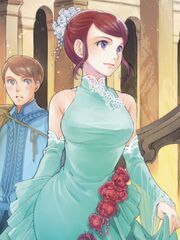 For nobles and commoners living in the city of Ehrenfest, the event takes place each year in the middle of summer[1]; those elsewhere in the duchy typically have marriages officiated during the Harvest Festival instead.

All Starbind Ceremonies include a collective ceremony officiated by a blue priest or shrine maiden (usually the High Bishop.) The officiating member of the clergy gives a sermon that includes readings from the bible, and then recites a prayer invoking the Supreme Gods, the Goddess of Light and the God of Darkness, who preside over marriage:

"O mighty King and Queen of the endless skies, O God of Darkness and Goddess of Light, hear my prayers. May you grant your blessings to the birth of new unions. May they who offer their prayers and gratitude to thee be blessed with thy divine protection."[2]

The couples who are to be married gather for the shared ceremony, wearing clothes in the Divine Colour of their birth season. Because the Starbinding only happens once per year, there is some pressure for single adults to find a fiancé before the event.

In the past, the Starbind Ceremony in the city of Ehrenfest was held at night for both commoners and nobles. However, when the population of the city grew too large for that to be feasible, a separate ceremony for commoners was established earlier in the day[3]. The ceremony is deliberately held in the summer to reduce the financial burden on the newlyweds, so they have more time to stock up on firewood and supplies before winter[4].

At third bell in the morning, the betrothed couples assemble in the chapel of the temple, where they listen to the scripture readings and recieve a blessing from the High Bishop. The ceremony lasts until fourth bell. After the ceremony ends, the Star Festival begins.

The Star Festival (星祭り, Hoshimatsuri) is an annual festivity among commoners in the city of Ehrenfest, held on the same day as the Starbind Ceremony. In the morning before the ceremony, most commoners who are not getting married go to the local forest to collect watery taue fruits.

As the newlyweds emerge from the temple into the central plaza, their friends and neighbors throw the gathered taue at them, and the married couples run through the streets trying to dodge the fruits. It's a chance for husbands to show off how well they can protect their wives by trying to defend them from getting wet, as well as a chance for those still unmarried to vent their frustrations. Once all the couples are sufficiently soaked (or have managed to escape), people start throwing the leftover fruits at each other. Anyone not wet is certain to become a target.

Later in the evening, children are sent home and forbidden from going outside for the remainder of the day. Adults gather for a feast in the central plaza with food and lots of alcohol. The new couples celebrate well into the night, and unwed adults use the opportunity to look for romantic partners[3].

Because the blue priests only visit Ehrenfest's outlying provinces in the spring (for Spring Prayer) and autumn (for the Harvest Festival), the Starbind Ceremony is held during the Harvest Festival instead. It is officiated by the highest-ranking member of clergy present.

The Starbinding is held on the same day as the provincial baptism and Coming of Age Ceremonies, making it a festive occasion for almost everyone. The marriages are usually followed by feasting and games of warf.

After the Starbind Ceremony is held for capital city commoners in the morning, the High Bishop travels to the archduke's castle to officiate the ceremony for nobles at night. It is believed that nighttime makes it easier to recieve the blessing of the God of Darkness[3].

The details of the ceremony are largely the same as for commoners, including a scripture reading and a prayer in the name of the Supreme Gods. Afterward, unwed adults are obliged to participate in nighttime socializing and look for a marriage partner. Children are not permitted to attend.

For more details on marriage among the nobility, see Noble Marriage.

In rare cases (as for Lamprecht and Aurelia's marriage) a separate or private Starbind Ceremony may be held. The attendees are limited to the adult family members of the marrying couple and their guards and retainers. During Lamprecht's Starbinding, the magic contract securing the terms of the marriage was also signed during the ceremony.

Unlike any other wedding, weddings of members of the royal family and archduke candidates - unless they marry "down" into regular noble families - are held in spring during the archduke conference. The ceremony is performed by the Sovereign High Bishop in the chapel of the Royal Academy[5].